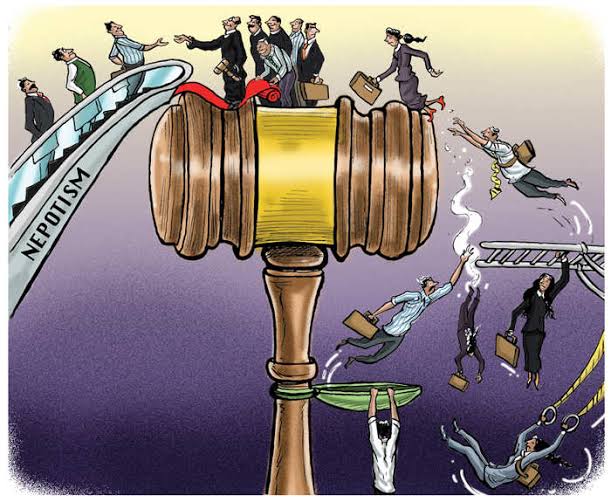 Nepotism is the practice of showing favoritism toward one’s family members or friends. These practices can have damaging effects on health and minds of people.

In a country like ours, nepotism is seen in almost every industry- be it economic, entertainment, political or social. Congress party in our country is the best example of nepotism in politics. The party is synonymous to Gandhi clan. Even on the social front, nepotism can be seen everywhere- be it societies, social gatherings or social media. In the business world, it means favoring / granting jobs to friends, relatives, regardless to merit. It can erode the support of non-favored employee and reduce the quality and creativity of management.

Some larger companies have adopted “Anti Nepotism” policies which prevent relatives from working in the same department or firm. But in smaller /family business nepotism is received in a more positive terms. In fact, it is considered a synonym for succession.

In entertainment industry, like Bollywood the most recent case of young star Sushant Singh Rajput’s suicide is the highlighting example of nepotism in the industry. It is such s shame that India’s top movie industry which makes second highest number of movies in the world, is controlled by half dozen nepotist. You need to belong to a particular clan, religion, have certain surnames and only then you will be inside or else, you are always an outsider.

Though, on the positive side, nepotism ensures the continuity of a company or industry when members of the earlier generation retires or dies. But its darker side can ruin the lives of smart and inspiring people with no favorable background.

Positivity is the key to success, else you end up in a mess

Life is hard, struggles are zeal, time is all we have for it to heal.

Nepotism, corruption, suppression, ends you up in big depression.

That is the moment when you forget, that life has much more for you.