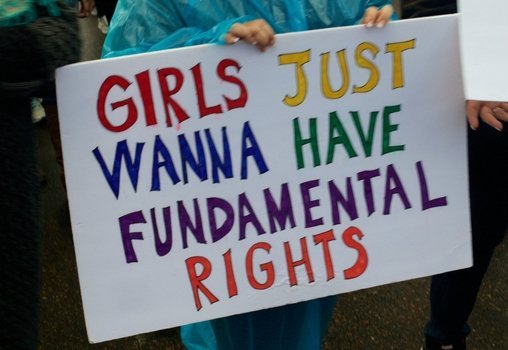 Feminism; a term which is simple but yet made controversial. “The advocacy of women’s rights on the ground of the equality of the sexes”, this is the definition given in the dictionary and firmly followed by a lot of feminists. However, a major chunk of the population does not believe this definition nor in the movement. The first wave of feminism was seen in the 19th and 20th century, which was aimed at fighting for fundamental legal rights like voting rights etc. Then came the second wave of feminism at the end of the Second World War which focused on social injustices like domestic violence, rape and reproductive issues. One can still find a good deal of literature in the form of books, movies and music dedicated to feminism. The feminism of this era is known as Third Wave Feminism which is positioned at new problems faced by women.

If we focus on the key area of the objectives of feminism which were socio-economic equality, fundamental rights on their bodies and legal entitlement are only halfway achieved.  In India, the Rigvedic times was the most gender-neutral phase, the conditions deteriorated during the later Vedic time. This era sowed the seeds of dowry, restriction on women’s education and the prohibition on widow remarriage, Purdah and Sati system, no right to property and life. Medieval period emphasis on women being a housekeeper and child marriage. Several revolutionary acts were passed by the British government. The Child Restraint Act (1929), The Hindu Marriage act (1955), Hindu Law of Inheritance (1929), The Hindu Marriage act (1956) Bengal Regulation act XXI (1779) which labelled female infanticide as murder. The condition of a few improved but to a very small limit as every community has different rules and regulation, also the legal system was not very well versed. In India,  a woman still faces sexual harassment, discrimination at the workplace, unhygienic maternity and periods, female infanticide, domestic violence, dowry system, acid attacks, the wage gap and much more unimaginable crimes.  Women in rural India are still deprived of the primary education due to reason of absence of proper washrooms, safety and orthodox thoughts. Despite the initiatives like Beti Bachao Beti Padhao, there is an approximate difference of 21.6% (according to censusindia.gov.in) in literacy rate of both genders (at the national level). After the Nirbhaya incident, the government created a fund for rape survivors and On March 21, 2013, the rape law in the country was amended. The new tougher anti-rape law Criminal Law (Amendment) Act, 2013 — to punish sex crimes redefined rape and made punishments more stringent — including death for repeat rape offenders. (TOI). But the law failed to provide as much protection it was expected to give due to weak implementation, inefficient investigations and unreported cases. It took seven years to punish Nirbhaya’s culprits, the judicial system needs an alarm clock. Speaking of Bollywood it has sexually objectified women since forever, eve-teasing and other crimes are shown in a normal way with no warnings. Statistically speaking Indian are ranked 3rd in porn viewership (2018) (spoindia.org) which is a highly concerning subject and be linked with an increasing number of sexual crimes against women. India has succeeded in decreasing the wage gap, engaging more women in education, political distribution and more women work in the formal and informal sector than before. But, the boys’ locker room shocked the nation that the youth of India has degrading views of women.

There has been a criticism for third-wave feminism as it is called “Male Bashing” but those are either pseudo-feminist or feminazi. And if #notallmen is justified then while looking at the concept of Feminist/Feminism #notallwomen shall be justified too. This movement might have caused problems to some due to the misuse of the laws that have been made to protect women but there is a disadvantage to everything and due to some cases one cannot scrap the actual motive of Feminism. Me too movement has generated few positive and few negative results. The concept does not disregard the crimes which happen with men in any way. Any crime done to any section of the society shall be punished. And one shall be treated equally irrespective of their status in society.